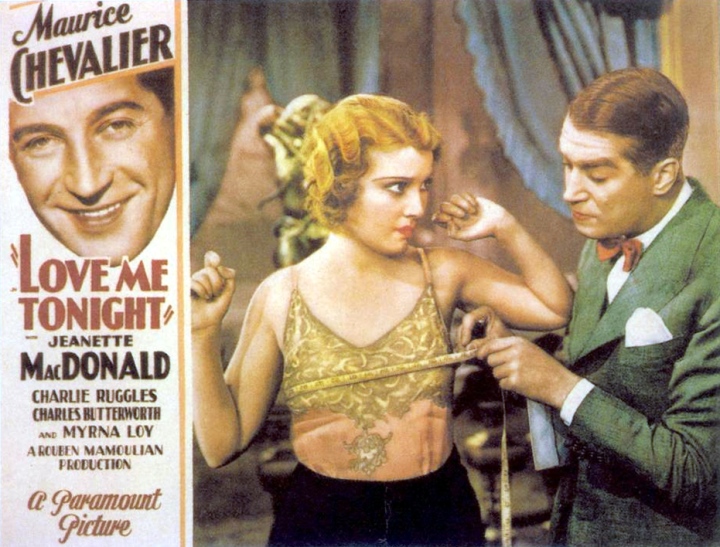 We were extremely excited to watch this, the first proper musical on the list, and it did not disappoint! From the opening shot and the rhythms made by the city to the train chase in the end, this was a thrilling experience throughout. Love Me Tonight features infectuous, funny songs, great performances, brilliant humour, the liveliest bridge party in cinema history, and lots and lots of innuendo.

The story has something of a classic fairytale and/or a Shakespeare play about it. A vicount convinces a tailor (Chevalier) to pose as a baron for a weekend so his uncle, the duke, will not learn that his nephew is in dept to the tailor. Meanwhile, the princess of the castle (MacDonald) is so sexually frustrated that she suffers fainting spells and the doctor even recommends marriage. Naturally, the “baron” falls for the princess and complications ensue. Hilarious, romantic, musical complications.

There are also three old ladies (our favourites!) who are seen stirring a cauldron-like thing at some point, a lovelorn count (the owner of the aforementioned flute and another favourite), an eccentric duke, a wild horse, a jumping stag, a very flirty young countess, a chase scene involving a train and a horse, and of course the charming tailor and the stubborn but unhappy princess.

We absolutely loved this film. The song “Isn’t it Romantic” was wonderfully staged, and the humour, music and characters made this a must-watch. ‘Tis a silly film for silly people, and we’ll definitely watch it again (in about 5 years time when we’ve finished the list, that is).

What we learned: if you do not make “boing boing”-noises when you see a stag jumping, you are dead inside. Also, if your castle does not have exaggerated proportions, it’s not a proper castle.