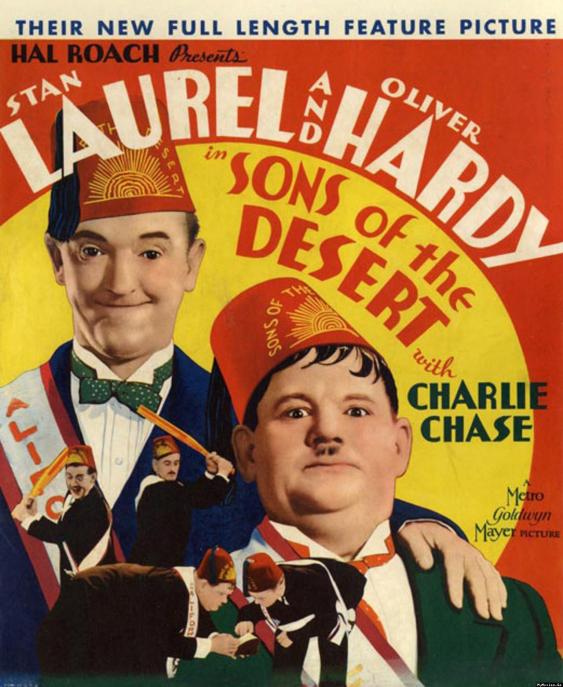 We have to be honest here, and say that this is not our favourite from the list. The opening scene is wonderful though. The “Sons of the Desert,” a second-rate freemason society, are having a meeting discussing their upcoming annual convention. Enter Laurel and Hardy (or Moss and Roy if you will), climbing over other attendees in order to get to the vacant chairs. This is by far the funniest scene in the film.

At the meeting, all members have to take an oath to attend the convention in Chicago the next week, and our two “heroes” have to figure out a way to go, given that they are both under the thumbs of their wives. Laurel, being an honest simpleton, gets permission from his wife just by asking, but Hardy tries too hard to be “the king of his own castle” and his wife forbids him to go. Thus, they must scheme and plot.

They manage to go under the pretense of traveling to Hawaii for Hardy’s health, but the ship they were supposed to come back on sinks and the wives (believing they might now be widows) go to the movies. Because that’s what you do when your spouse might be dead. There, a newsreel shows their supposedly drowned husbands at the Sons of the Desert convention and they realise they have been tricked.

There are some very funny scenes in this, some silly slapstick, a farcical plot, and a good musical number with a girl who looks like Olivia Colman and Mae Whitman had a love child (which is a good thing!) but on the whole we were slightly underwhelmed. Or possibly just whelmed. It’s OK for a hungover Sunday afternoon though.

What we learned: where the trope of nagging wives and lying husbands came from (although it’s possible that’s an even older stereotype). Also, spousal abuse is apparently hilarious if it’s from a woman to a man.