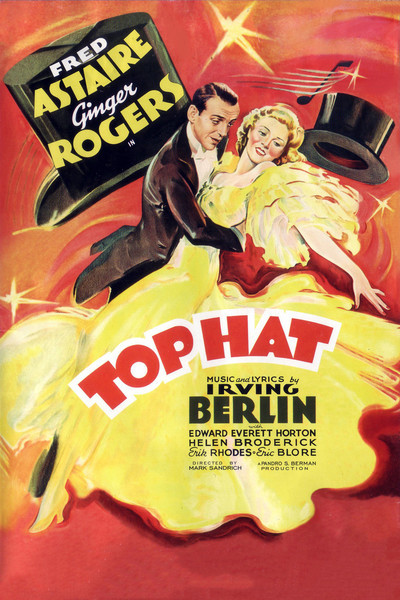 Jerry Travers (Astaire), an American dancer and Broadway star, is bringing his talent to Britain. Producer Horace Hardwick (Horton) and his wife Madge (Broderick) have a plan that their newly imported star should be married (and Madge has an idea as to who his wife should be), but Travers politely disagrees. So of course he falls in love. With the downstairs neighbour Dale Tremont (Rogers) who he annoys by tap dancing on her roof before he drowns her in flowers and sort of kidnaps her. This being an old-timey romantic musical screwball comedy though, he does these things in a very charming and endearing way

Their romance is complicated further when Dale (who incidentally is the Jerry’s intended wife) mistakes Jerry for Horace and believes him to be married to her friend Madge. She goes off to Venice with designer Alberto Beddini to meet up with the “betrayed” wife, followed by the admirably dedicated valet Bates (Blore – our favourite).

After the very successful opening night performance, Travers and Hardwick charter a plane to Venice themselves, and Tremont decides to play a trick on her “dishonourable” suitor, which backfires horribly and leaves her even more confused. However, this being a comedy, it all works out in the end (thanks to Bates).

The plot is farcical and frustrating but it has its moments, some of them laugh-out-loud. Top Hat has an excellent cast of characters – mainly Madge Hardwick and Bates, both of whom we now adore and want to spend our lives with. The real reasons to watch the film though, are the spectacular dance numbers and the amazing costumes. If you like that sort of thing. And let’s face it – who doesn’t.

What we learned: For the girls – the kiss. For the men – the sword! Also, SILENCE! Must be observed in the club rooms.