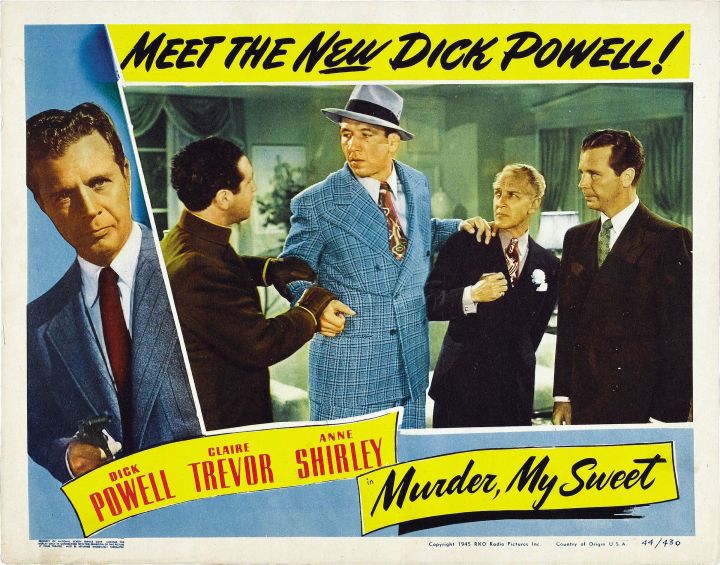 We continue our sordid Noir journey with our first encounter with Philip Marlowe, Raymond Chandler’s private detective who’s made numerous film and TV appearances. In Dmytryk’s Murder, My Sweet, we open with his interrogation for murder as he recounts the events leading up to his arrest.

A man walks into his office and what a man! Legs up to here and strong as a bull. Moose Malloy (Mazurki) is his name and of course, he’s looking for a Dame. Velma. A redhead. She used to sing. Marlowe (Powell) takes on the case and they go out looking for her. Although finding a girl eight years later isn’t done in a night.

It doesn’t take long for Marlowe to be approached by two more clients, one of whom gets himself killed and Marlowe knocked out within hours of hiring him. Luckily he paid in advance. He hires the detective to act as backup while trying to buy back a priceless jade necklace from some robbers, but the deal goes horribly wrong.

Then, finally, a Dame walks into his office.

Reporter Allison, real name Ann Grayle (Shirley), tries to get information about the jade and when he sees through her ruse, she admits that the necklace was worn by her stepmother when it was stolen. Marlowe goes to investigate and meets the stepmom (Trevor). And she’s a real Dame! Not much older than her stepdaughter, she puts the moves on Marlowe and plays the victim quite well.

From then on the plot thickens. Marlowe is knocked out, threatened with guns and fists, drugged and put in a very amusing dream sequence. He also kisses all the dames and hatches all the plots in order to satisfy those clients he can and bring justice to those he cannot. All the while, his amazing internal dialogue narrates his actions. The similes! The quips! The banter! We need to start talking more Noirish in our daily lives.

Admittedly, taking the juvenile from all those Busby Berkeley musicals seriously as a hard boiled detective was a bit difficult at first, but he does actually pull it off. That being said, we’re very much looking forward to Humphrey Bogart’s Marlowe in the upcoming The Big Sleep, which is an old favourite of ours. Murder, my Sweet was very good and entertaining though, and we’re very excited about all the Film Noir in this part of the list. Now we just need to practice our banter.

What we learned: stay away from Dames! Also, we need to read more Raymond Chandler.