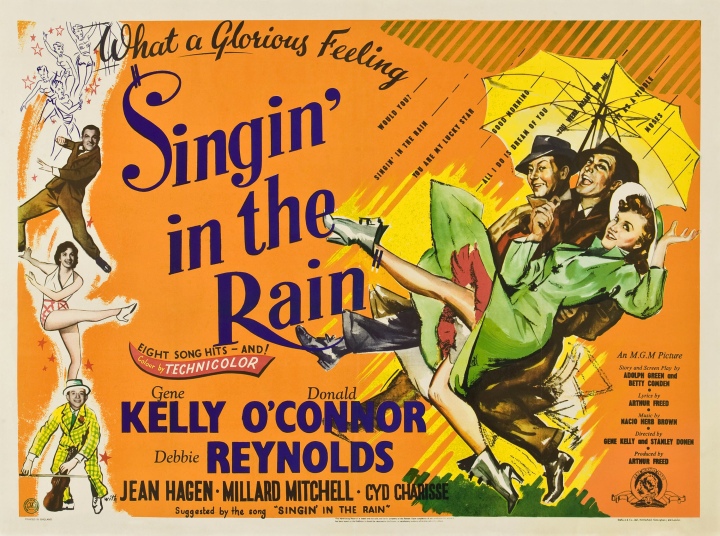 A musical classic which we, like probably most of you, have seen numerous times before, there’s nothing not to love about Singin’ in the Rain. In the late twenties, silent movie stars Don Lockwood and Lina Lamont (Kelly and Hagen, respectively) have to make the transition into talkies or fade into obscurity.

They have one problem though – Lina Lamont has the most grating, annoying voice in history, and an accent which in no way matches her glamourous image. The solution: get aspiring actress and Don’s love interest Kathy Selden (Reynolds) to dub all of Lina’s dialogue and singing, against the star’s wishes.

With the help of the studio heads and sidekick Cosmo Brown (O’Connor), Don and Kathy create a success with their musical version of the silent stinker Don and Lina were supposed to put out.

Gene Kelly is, as always, amazing, as are Reynolds and O’Connor. The romance between Don and Kathy is very sweet – after the initial bickering which all film romances must go through, they are actually adorable together. Meanwhile, Cosmo’s snarky one-liners, cheerful disposition and fantastic physical comedy and dance moves make him the ultimate sidekick.

We love the musical numbers, the many many films within the film, the discrepancy between the stories Don tells the media vs. the real version of events, the physical comedy and basically everything about this film. It’s just a magical experience which will make you happy no matter what, and if it doesn’t you might need to see a doctor because you have no heart and you’re probably dead inside.

What we learned: There’s nothing like a good behind-the-sofa fight scene and a great dance number!