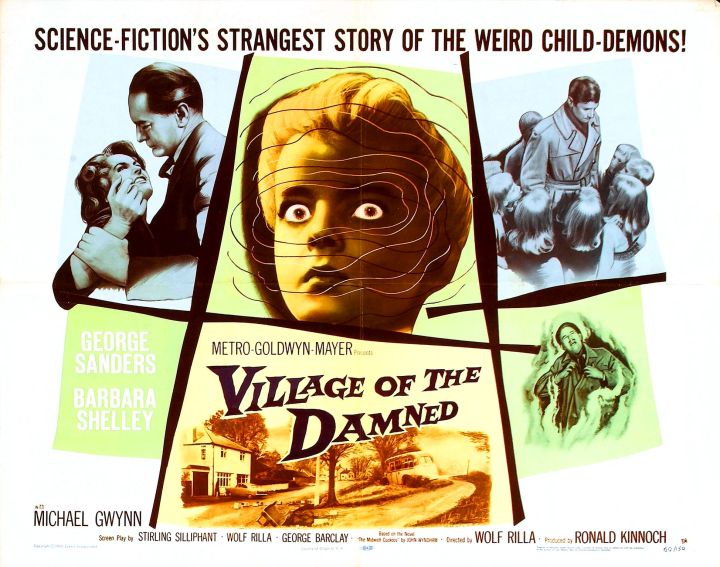 In a small British town, all the residents (and animals) simultaneously pass out one day. They wake up a few hours later, unharmed, but later find that all the fertile women in the village are pregnant. Which obviously leads to some uncomfortable questions and suspicions.

The children are born 5 months later (which hospital show-fans everywhere know is waaay too early), and they all have white blond hair and intense eyes. Among the new parents are Anthea (Shelley) and Gordon Zellaby (Sanders). The latter is a professor who enjoys a good relationship with British Intelligence, and he takes on the task of observing and possibly educating the strange children.

The children develop quickly, and are supersmart and polite, which in itself is a warning sign for anyone who’s ever encountered an actual child. In addition, they seem to have a hive mind and powers of telepathy. If anyone from the village poses any sort of threat to them, they soon become suicidal and the threat is eliminated. But what is their purpose? And will humanity survive their coming?

Village of the Damned is such a classic horror movie we will just go ahead and assume that everyone has seen it. We love the final scene in which the kids tear apart Gordon’s mental wall, the chilling, creepy children themselves, and the unsettling atmosphere. The kids, and especially David Zellaby (Stephens), are calm, rational and emotionless, and very disquieting. Their reactions to any threat are relentless and brutal which works great coming from adorable little kids.

With Halloween coming up, you could do a lot worse – and it’s short enough to fit neatly into any sort of marathon you may be planning. Also, perfect low budget costume idea for those of you with children of your own! Just prepare yourself to be terrified of them.

What we learned: We’re definitely never having children. Never.