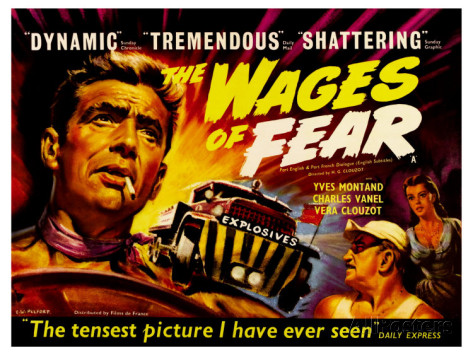 In a small village somewhere in South America, men of various nationalities are looking for work and a ticket out of extreme poverty and to more civilized places. After a horrible accident at a nearby oil field, the American owned “Southern Oil Company” needs to transport huge quantities of nitroglycerin to the field, but have no inclination to spend time and money putting security measures in place.

Not prepared to sacrifice proper American lives on this suicide mission, the company recruits drivers among the unemployed village vagabonds – desperate men ready to do anything for the $2000 offered as payment.

The lucky(?) selected drivers (after some light corruption and implied violence) are Mario (Montand) and Señor Jo (Vanel) in one truck, and Luigi (Lulli) and Bimba (van Eyck) in the other. They are informed of what they are transporting as well as warned by another potential driver that even if they survive the impossible task, they will be mentally scarred for life. However, desperate people are willing to do desperate things, and the chosen men go on their way.

The ensuing road trip is one of the tensest we’ve ever seen. Every tiny obstacle, of which there are many, is potentially fatal, and the relationships between the characters grow very strained. It is a good film that can get us to care about characters who are intrinsically unlikable, and Clouzot manages that difficult task.

This is another film which we did not expect to enjoy as much as we did. It is excruciating to watch the four men attempt to get their deadly cargo to their destination, and the tension manages to stay high all the way to the final scene. Despite a slightly slow start, the 147 minutes fly by and leaves you a nervous wreck. We’d really love to see this on the big screen one day, so if the local film club ever does a screening, we’re first in line.

What we learned: Oil companies are ruthless and evil. Also, money is not worth risking everything for.